At the Paris menswear shows on Sunday Belgian designer Kris Van Assche made his hotly anticipated debut at Christian Dior, while other new faces set about revamping Cerruti and Francesco Smalto. 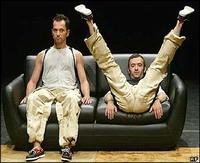 Pants in a gray Prince of Wales check had extended cuffs that hovered above the ankle. Dark worsted suit jackets with insets of black satin respected the minimalist spirit of the brand.

Van Assche has garnered rave reviews since launching his own label three years ago, but he is stepping into mighty big shoes.

Even before the display, fashion editors were mourning the absence of Slimane, who attracted a cult following for his skinny suits - Chanel maestro Karl Lagerfeld famously lost 42 kilograms (93 pounds) to fit into them.

After seven years at Dior, however, Slimane appeared stuck in a rut and chose to move on.

By appointing Van Assche, his former assistant, Dior hopes to keep its winning formula intact. The designer said being familiar with his employers was an advantage as he learns to juggle his new design duties with his own label.

"Ultimately, these two universes manage to function very well alongside each other. It's happening more naturally than expected," he said earlier in the week.

If Van Assche made a conscious effort to distance himself from Slimane, Canadian designer Nicolas Andreas Taralis - another Dior alum - carried a burning torch for his mentor.

His catwalk debut for Cerruti had all the hallmarks of a Slimane show, from the neon strip decor to the androgynous models and slimline capes.

Taralis is a flawless tailor, as witnessed by slouchy black trousers with low cummerbund belts and shrunken jackets in gray wool sparkling with silver thread.

As a pastiche, it was pitch perfect, but one could not help thinking: will the real Taralis please stand up? And was it really necessary to underline the display with throbbing industrial noise that had guests' teeth rattling in their heads?

In addition to lightening the color palette with shades of cream, oatmeal and greige, she put her stamp on the collection with precise details like cutaway waistcoats that buttoned onto pants.

Smith was inspired by the do-it-yourself spirit of impoverished British art students and the primary color combinations of painter David Hockney.

Lanvin stuck to its formula of precious elegance with lightweight outfits that blurred the boundaries between inner- and outerwear. Silk pajama tops came tucked into shorts, while sweat pants were unexpectedly paired with a shirt and tie.

"We felt a desire for fragility, for sensuality, for lightness," said designer Lucas Ossendrijver. "That is also what lightness is about, mixing things and not taking yourself too seriously."