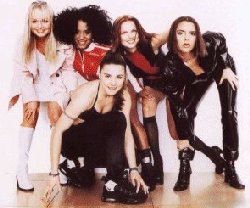 Following a calculated publicity buildup, the original Girl Power group of the 1990s announced Thursday that they have agreed to get together for 11 concerts around the world in December and January.

They will be the group's first concerts since breaking up in 2001, and the first with all five of the original group since Geri "Ginger Spice" Halliwell quit to pursue a solo career in 1998.

"We wanted to say thank you to our fans. It just feels very right for us," Chisholm said.

"Obviously it's nostalgic. But equally, if new fans want to come along, that's fantastic," Halliwell said. "I like to think our songs are universal and they are timeless."

The group's first single, "Wannabe," was released in 1996 and was followed by a string of No. 1 hits.

But their last album, "Forever," released in 2000 and without Halliwell, fared poorly.

You could now call them the Spice Mums, and Beckham said the tour will be designed to accommodate the band members' seven children. Bunton is now pregnant with her first child.

"Our priority is going to be our families. We want to have fun," said Beckham, who has had three sons with her husband, soccer star David Beckham. "That's one of the many reasons for this, for our children to see what we used to do."