After several seasons when it seemed that Italian style was always on vacation, designers have put their men back into city "civvies" for the Summer 2008. 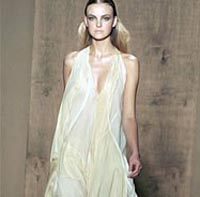 Shorts and bathing trunks are relegated to a few pool side moments, with trousers and jackets the favorite warm weather garb. Suits complete with white shirt and silk tie also contribute to the return of office wear.

The five-day round of menswear preview showings for next year's summer season which ended here Wednesday, did away with the jeans mania which has flooded the market in recent years, and replaced denim with shiny techno fabrics, and soft cotton jersey. Neoprene is the favorite new material.

Despite being elegant, styles are rarely uptight, with jackets so soft they look like sweaters and a loose cut for trousers. Low-waisted, baggy pants are definitely out, bringing belts back in fashion. This round also cuts short the life of the Bermuda suit introduced several seasons ago.

In the sweater department, the new look includes zipped hooded versions in cashmere or nylon, as well as pullovers in see-through gauze. A generous cowl neck replaces the recently revived turtleneck.

Gone are sweat pants and track suits, to be replaced by overalls, the most popular sports item of the season. For the more adventurous, some designers offered evening overalls in shiny silk.

To underline the return to dressing up, the designers adorn their evening wear with rich embroidery and luxurious crystal beading. In more than one collection, the satin seams of tuxedo pants are fashioned in shiny metal.

Silk pajamas are offered as an alternative to black tie dressing.

Checkered fabrics are back next summer, giving a 1970s feel to this round of "moda Milanese." Other favorites are houndstooth and Madras plaid. Leather as usual plays a big role in Italian menswear.

The color palette sticks to staple black, white and gray, with hints of faded pink and blue, and a few wild moments of bright yellow, purple and green.

The winner in the footwear department is the sandal, or as some dub it, the "mandal," showing up in a myriad of versions from the thong to the trekking sandal to the Greek sandal strapped around the calf. At times the new sandal was worn with socks - up to now most unfashionable - and was also shown under a daytime suit or an evening pajama.

Sneakers take a step back this round, with pointy-toed shoes often in luxurious reptile skins the runner-up to the sandal.

Hairstyles next summer are short and boyish, either tufted or wind blown, but never unkempt.

All said it was a good round of fashion, with Milan miraculously spared the heat wave that gripped most of Italy, and buyers happy to be given the opportunity to dress up their clients again.

The week began in sadness with the unexpected death of designer Gianfranco Ferre, exactly a week before the presentation of his new collection set for this past Sunday. The show went on as scheduled, and ended with a three minute standing ovation as a bevy of barefooted little boys came down the catwalk wearing pristine white Ferre shirts.

The week also marked the return to Milan of fashion whiz Tom Ford, in town to launch his new perfume "Tom Ford for Men." The Texan designer, threw a barbecue worthy of his home state, for several hundred of his closest friends in the garden of a downtown Milan palazzo to celebrate the event.

The fashion crowd now moves on to Paris, for the menswear collections there, followed by the Paris couture week.