Paris Hilton told CNN's Larry King she would never again drink and drive and that her time in jail was "a time-out in life." 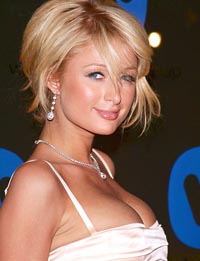 In her first televised interview since leaving jail, a demure Hilton said Wednesday that even though she's an Aquarius and "we're social people," her time behind bars taught her "there's a lot more important things in life" than partying.

"I'm frankly sick of it," Hilton said, with loose, re-blonded locks and camera-ready makeup. "I've been going out for a long time now. Yeah, it's fun, but it's not going to be the mainstay of my life anymore."

She said her incarceration was "a very traumatic experience" that inspired a "journey" of self-discovery that she intends to continue. The world will see a new Paris Hilton, she said.

Hilton was jailed after being caught twice driving with a suspended license while on probation for reckless driving.

"I'm glad it happened in a way because it's changed my life forever," she said in the pre-taped, hour-long interview. "I feel stronger than ever and, I don't know, I feel like this is a lesson in disguise."

The hotel heiress spent about 23 days in custody before she was sprung Tuesday. Hilton passed the time, she said, considering "what was important and what I want to do."

Among those plans? Using her fame to bring attention to social causes rather than the newest Hollywood nightspot.

"I feel like being in the spotlight, I have a platform where I can raise awareness for so many great causes and just do so much with this instead of superficial things like going out," she said. "I want to help raise money for kids and for breast cancer and multiple sclerosis."

Hilton said a big misconception about her is that she lives off her family's money.

"I completely disagree with that," she said. "I work very hard. I run a business. I've had a book on The New York Times best-sellers list. I'm on the fifth season of my TV show. I did an album. I do movies."

The media has exaggerated her party-girl image, she said, telling King twice she's never taken drugs and does not have a drinking problem.

"I'm not really into it," Hilton said of drinking.

Asked why she never tried to correct inaccurate reports of partying and drug use, Hilton said, "I'm telling you right now so I put a stop to it."

Alone in her cell for 23 hours a day, Hilton devoted herself to reading, writing and thinking. She said she made plans to help her fellow inmates and imagined ways to be "a more responsible role model."

"I feel like God does make everything happen for a reason," she said. "And it gave me, you know, a time-out in life just to really find out what is important and what I want to do, figure out who I am."

Educated in Roman Catholic schools, Hilton said she's "always been religious" and "always had a sense of spirituality but even more so after being in jail."

She bought a Bible from the jail commissary and read it daily, she said. Asked to name her favorite passage, she smiled and looked away.

At various points during the interview, Hilton read excerpts from her jailtime journals, beginning each passage with a heavy sigh. She wrote about being at a crossroads, characterizing it as "neither a downfall nor a failure, but a new beginning," and about her "compassion for those I left behind at the prison."

"I want to help set up a place where these women can get themselves back on their feet," she read. "I know I can make a difference and hopefully stop this vicious circle of these people going in and out of jail."

After a judge ordered her back to jail, Hilton said she coped by meditating and reading letters from fans. But she still had nightmares of "someone trying to break into my cell and hurt me."

"Just the whole idea of being in jail is really scary," she said. "I hate to be alone so that was really just hard for me in the beginning."

When asked about the party crowd she hangs with, including Britney Spears, Lindsay Lohan and her reality TV co-star Nicole Richie, Hilton said "everybody makes mistakes."

"I think it's hard for anyone when you're in the spotlight so much," she said. "It's overwhelming for any young girl, but I've handled it well."