For the first time ever in the U.S. South, blacks are as well represented on college campuses as they are in the region's population as a whole. 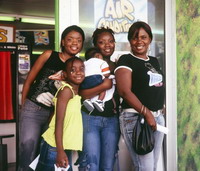 The milestone is noted in a new fact book to be released Monday by the Southern Regional Education Board, a nonprofit organization that promotes education.

In the 16 states measured, the number of blacks enrolled in colleges has risen by more than half over the last decade. They now make up 21 percent of college students and 19 percent of the overall population.

The number represents progress but it also has to be seen in context. A major contributing factor is the South's rapidly growing Hispanic population, which has reduced the proportion of the population that is black, and thereby made the milestone easier to reach mathematically.

And educators also stressed that the number should not obscure the persistent achievements gaps affecting blacks both in the South and nationally. In particular, black enrollment rates for college-age students, while improving, still lag well behind those of whites, as do the graduation rates of black college students.

With a college degree now almost a prerequisite for high-paying jobs, those achievement gaps pose an economic threat - and the South will be on the cutting edge of that. In 2005 about 61 percent of public high school graduates in the South were white, the education board said, but by 2018 that figure is expected to be 45 percent.

"We've made tremendous progress, don't get me wrong," board President Dave Spence said. But, he added, unless achievement gaps narrow, "we're going to be in trouble. We already are in trouble, but we'll be in more trouble seven or eight years down the road."

The latest report may not reflect precisely what many consider the South, because the 16 states it covers also include border states Kentucky, Delaware, West Virginia and Maryland.

Still, the report reflects the reality that many more Southern blacks are enrolling in college. In those states, about 1.1 million black students were enrolled in college in the fall of 2005, 52 percent more than a decade earlier.

The increase have come largely at new and expanding public, traditionally white universities and two-year colleges rather than at historically black colleges, which for many years shouldered nearly all the burden of higher education for Southern blacks. Many of those schools still exist, but their share of black enrollment in the region has slipped from 26 percent to 19 percent over the last decade.

"We've removed a lot of the barriers and accepted that we will have to provide higher levels of learning support in the short-term," said Erroll Davis, who oversees the 33 institutions in the University System of Georgia, noting minority students arrive on campus with lower levels of college preparedness on average.

Overall, blacks represent 31.4 percent of all Georgia college students, about 1 percent higher than the proportion in the overall population. The proportion of blacks in the state university system is about 24 percent - higher than a decade ago but still below the population as a whole.

The number of Hispanics in higher education in the South has also shot up sharply over the last decade - by about 71 percent to about 552,000 in the region the board studied. But unlike for blacks, it remains well below the proportion of Hispanics in the region's population.

Nationally, 25 percent of Hispanics aged 18-to-24 attend college, compared to 33 percent of blacks and 44 percent of whites. That means the fastest-growing major group has the lowest college-going rate - an alarming long-term threat to the goal of increasing the percentage of workers with college degrees.

The analysis, which applies only to four-year colleges, found six-year graduation rates of 40 percent for blacks, 46 percent for Hispanics, and 56 percent for whites.