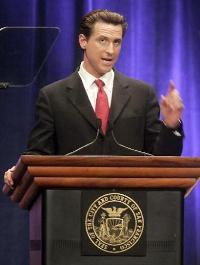 The move was billed as a way to help stem global warming and save taxpayer money.

"We're hoping to set the example for the private sector and other cities in getting off the bottle," said Tony Winnicker, spokesman for the San Francisco public utilities commission.

In a press release announcing the decision, the mayor of this Northern California city cited the environmental impact of making, transporting and disposing of the bottles. More than a billion of them end up in the state's landfills each year, the release said.

When the ban goes into effect, city and county offices will dispense municipal tap water from a reservoir. Winnicker said exceptions will be made in cases where potable water is not easily available or poses health concerns.