The release date of Paris Hilton was determined by the Los Angeles County Sheriff's Department's Inmate Reception Center. The exact hour was not disclosed. 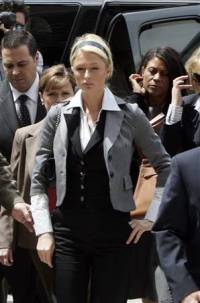 "There's no set time," said Deputy Luis Castro, adding he did not know if any special arrangements had been made to return Hilton to her Hollywood Hills home.

The 26-year-old Hilton, who was sentenced to 45 days in jail for violating her probation in an alcohol-related reckless driving case, surrendered on June 3.

Sheriff Lee Baca released her to electronically monitored house arrest on June 7, citing an undisclosed medical condition. But the judge, who had specifically barred Hilton from house arrest, ordered her to court the next day and returned the sobbing hotel heiress to jail.

Although her sentence was for 45 days, authorities have said all along that with time off for good behavior and because of crowded jail conditions, Hilton was likely to serve only 23. Tuesday will mark the 24th day since she surrendered.

Hilton's release is scheduled for the same day Baca is to appear before the county Board of Supervisors, which is investigating whether her June 7 release amounted to preferential treatment.

The sheriff has said Hilton's celebrity focused so much attention on her case that she actually served more time than an average person would have under the same circumstances.

Also Friday, NBC and ABC sought to distance themselves from reports that they were offering money in pursuit of an exclusive interview with Hilton after her release from jail.

ABC News said the Hilton family offered the interview to Barbara Walters, but that Walters and ABC News executive David Sloan turned it down on Friday, said an ABC News executive who said he would discuss the talks only on condition of anonymity.

NBC News, which has said it was interested in speaking to Hilton only if no money were involved, said no interview had been arranged. But the network did not immediately address contradictory media reports about whether it was still pursuing the interview.

Earlier in the week, ABC News said it believed it had secured the Hilton interview with Walters. The network had agreed to pay the Hilton family up to $100,000 (Ђ74,399) for the use of exclusive video and other material to go with the story. But ABC learned from the Hiltons that it had lost out to an "astronomical" offer from NBC, the executive said.