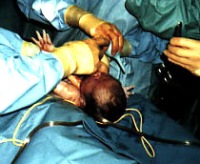 A 15-year-old boy of two doctors performed a filmed Caesarean section birth under his parents' watch in Southern India to become Guinness record holder as the youngest surgeon.

Instead, the boy's father could be stripped of his licenses and may face criminal charges, officials said Thursday.

"We were shocked to see the recording," Prasad told The Associated Press, adding that the IMA told Murugesan that his act was an ethical and legal violation.

Murugesan owns and runs a maternity hospital in the city of Manaparai, Prasad said in a telephone interview from Manaparai.

Murugesan, who could possibly be prevented from practicing and face criminal charges for allowing his son to perform the operation, expressed no regret and accused the Manaparai medical association of being "jealous" of his son's achievements, Prasad added.

"He said this was not the first surgery performed by his son and that he had been training him for the last three years," said Prasad.

Murugesan told the medical association that he wanted to see his son's name in the Guinness Book of World Records.

The family could not be immediately reached for comment.

Indians have long had a special fascination with world records, and reports of unlikely feats are staples in the Indian media. The underage surgery is not the first time that record-setting zeal has proved dangerous.

Last year, a 4-year-old boy, Budhia Singh, attempted to run a 70-kilometer (43-mile) marathon in an attempt to earn a spot in a local record book. Doctors stopped him after 65 kilometers (40 miles) when he showed signs of extreme exhaustion. Afterward, they found the child to be undernourished, anemic and under cardiac stress.

The baby that Raj delivered was born with a noticeable lump on the spinal cord, Prasad said, but added that the birth defect had nothing to do with the surgery having been performed by a 15-year-old.

Prasad said that his team had reported the surgery to the state's top medical association in state capital Chennai.

"We'll get the report and then we'll see whether there are any violations ... prima facie it looks like there is a big violation," he said.

"We will definitely take action against the concerned medical officers."