China says no to dyed hair, jewelry or smoking for police

No more brightly dyed hair, flashy jewelry or smoking in public for China's police while they're in uniform, state media reported Thursday. 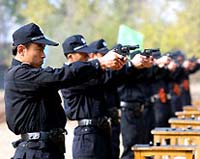 China says no to dyed hair, jewelry or smoking for police

Xinhua News Agency said repeat offenders would be fired under new rules from the Ministry of Public Security.

Police have been banned from dying their hair unnatural colors, wearing jewelry and smoking in public while in uniform, the agency said.

It said officers who arrive for work with colored hair will be ordered to return it to the original color, while necklaces and rings will be banned.

"Minor offenders will be lectured and asked to mend their ways," Xinhua quoted the regulations as saying. "Those who repeatedly break the rules or whose behavior has a detrimental impact could be sacked."

Female officers are also banned from "wearing scarves and having varnished fingernails."

"Police officers in uniform must not smoke in public places, drink, or go to entertainment venues for personal reasons," the regulations say.

Xinhua said poor police behavior has been one of the biggest complaints in cities like the capital, Beijing.

The report did not mention the 2008 Summer Olympics, but Beijing residents have been repeatedly told to stop spitting and to wait patiently in lines to improve the city's image ahead of the Games.