Just two days after parting ways with her manager, Kelly Clarkson has canceled her upcoming summer tour over disappointing ticket sales, yet another sign of turmoil as she prepares to release her third album, "My December." 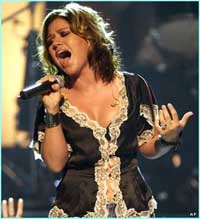 In a statement on her Web site, Clarkson said: "In the craziness of the music business, performing is what I look forward to doing the most, so it really is disappointing for me to have to tell you that I won't be coming out to tour this summer. The fact is that touring is just too much too soon.

"But I promise you that we're going to get back out there as soon as is humanly possible to give you a show that will be even better," she added.

In a statement released by her new representative, Paul Freundlich, it acknowledged the sales for the arena tour have been slow. The tour will be on hold and the size of it will be re-evaluated, the statement said.

"The day when she will play in sold-out arenas is, no doubt, coming, but for now her fans should look forward to seeing her in a more intimate concert environment," Gregg Perloff, CEO of concert promoter Another Planet Entertainment, said in the statement. "Kelly deserves a tremendous amount of praise for her courage in not only being a part of, but in supporting, this difficult decision."

This is the latest problem to beset the Grammy-winning singer amid the release of her third album, due out on June 26, the follow-up to her multiplatinum disc "Breakaway." The 2004 album proved a critical success beyond her fame as a former "American Idol." Clarkson helped write some of the songs on that disc, including the hit ballad "Because of You."

But this spring, reports surfaced that record mogul Clive Davis, who oversees the RCA label for which Clarkson records, was dissatisfied with the direction of the new record and had clashed with Clarkson over it.

In an interview with Associated Press Television in May, Clarkson said media reports of a feud between the two were exaggerated but admitted there was tension.

"There's always this battle, and it's not a bad battle to have," she explained. "I mean, you obviously don't want `yes' people around you. And, obviously, (Davis) and others at the label have been in the business far longer than I have. So you obviously take their opinions in."

In the end, though, "I always go with my gut," she said. "My gut has obviously done pretty well for me thus far, so I don't see why I shouldn't keep listening to it."

But the first single from "My December," the angry rock song "Never Again," was not a huge hit, and while it peaked at No. 8 on the Billboard chart, it quickly fell from the top 10 and is now at No. 17.

This week, she fired her manager, Jeff Kwatinetz of The Firm management group.

Refunds will be given for those who purchased tickets to Clarkson's tour.