A patient whose double lung transplant operation was stopped after a plane carrying donor organs crashed has received a second set of lungs. 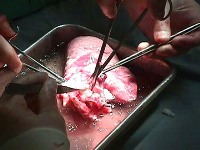 The 50-year-old Michigan man, whose name was not being released at his family's request, was in critical condition at a University of Michigan Health System hospital after the more than seven-hour surgery ended early Thursday, the Health System said.

"We are relieved that we were able to do this transplant and give this man another chance for life," Dr. Jeffrey Punch, director of the Division of Transplantation at University of Michigan, said in a statement. "Our friends that died in the crash would have wanted us to go on with our work."

The patient already was prepped for surgery when the plane crashed Monday, killing six members of a Survival Flight team.

"He is significantly improved," Chang said of the patient.

The organs were transported by chartered plane from the donor hospital to Willow Run Airport near Ypsilanti, where a transplant donation specialist met the plane and transported the organs to the hospital on a Survival Flight helicopter.