Veterinarians at the Memphis Zoo said they are concerned about the pregnancy of Chinese panda Ya Ya after they failed to detect an ultrasound image of the fetus or a heartbeat. 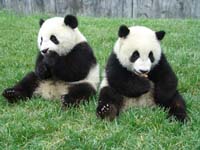 Blood tests have shown the hormone progesterone, which indicates a pregnancy, but at a lower level than it should be, curator of mammals Matt Thompson told newspaper The Commercial Appeal.

"The lower hormones are not what we expected, so this might not be a good pregnancy," Thompson said.

Ya Ya and a male panda, 8-year-old Le Le, are on loan from China.

Zoo officials gathered Wednesday to watch radiologist Dr. George Flinn perform the ultrasound looking for a fetus that is believed to be no larger than a ping-pong ball right now.

Each week zoo workers have entered a cage to perform an ultrasound, with Ya Ya laying back for treats like banana chips while Flinn rubs a shaved spot on her belly with the ultrasound wand.

Although no heartbeat has been detected, Flinn has detected a gestational sack, where the fetus would develop, and a fetal pole.

Ya Ya has been showing behavioral signs of pregnancy, such as occasional agitation, sleeping more often and becoming more secluded.

Another ultrasound scheduled for next Wednesday is expected to show better results if the fetus is still growing. If the pregnancy is not successful, the zoo plans to try artificially inseminating her again.

Pandas are notoriously poor breeders - one reason their species is endangered - and females have only three days a year in which they can conceive. Gestation lasts about 133 days.

In Washington, officials at the National Zoo said Chinese panda Mei Xiang might be pregnant for the second time in two years.

But there is no reliable pregnancy test for pandas, and this could be a false alarm, the zoo warned Thursday.

Mei Xiang showed a spike in hormone levels Wednesday, two months after she was artificially inseminated with semen taken from Gao Gao, a giant panda at the San Diego Zoo.

Only three other U.S. zoos - San Diego, Washington and Atlanta - have giant pandas. The most recent panda cub born in the U.S. was Mei Lan in Atlanta last September.