A fisherman who landed what state wildlife officials believe is a juvenile great white shark could face federal charges. 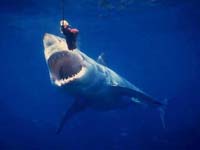 Authorities do not believe Michael Davidson and his companions on board the 33-foot (10-meter) "Little One" landed a great white deliberately. They may have misidentified 5.5-foot (1.7-meter) shark as a mako, said Lt. Aaron Hurd of the state Division of Fish and Wildlife.

Fish and Wildlife enforcement agents found the shark while on routine patrol Saturday morning. They boarded the private fishing boat as it arrived at the North Shore Marina at Indian River Inlet.

State officials said the shark, which weighed 179 pounds (81 kilograms), was caught about 8 miles (13 kilometers) offshore. The shark has been sent to the National Oceanic and Atmospheric Administration for DNA testing.

If the animal is confirmed as a white shark, Davidson could be prosecuted under federal law for possession of a protected species. Fish and Wildlife agents also said that Davidson was not carrying a valid permit to fish for species such as sharks and tuna in federal waters.

Efforts to contact Davidson by telephone at his Frankford home Thursday afternoon were not successful.