Police stopped a 5-year-old boy from setting off on a 100-kilometer (60-mile) walk in scorching heat across east India on Wednesday, citing a government order that labeled an earlier such stunt as "torture." 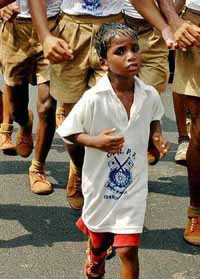 Dozens of police officers blocked a road in Bhunbaneshwar, Orissa state, preventing Budhia Singh - who ran a 65-kilometer (40-mile) marathon in the same state last year - from beginning his 10-day trek to Calcutta, the capital of West Bengal.

"We have an order that Budhia Singh should not be allowed to participate in the proposed walkathon," Amitabh Thakur, superintendent of police, told reporters in Bhunbaneshwar as the blazing sun warmed the town to 38 degrees Celsius (100 Fahrenheit).

Singh's mother, his coach Biranchi Das, and nearly 50 supporters argued with police and later began a sit-in protest on the road where police blocked Singh.

Das said his attorneys were approaching a local court to get the government order quashed and that the sit-in would continue until the court ruled on their appeal.

In May 2006, Singh attempted to run a 70-kilometer (43-mile) marathon, sparking protests from child rights activists. Doctors stopped him after 65 kilometers (40 miles) when he showed signs of extreme exhaustion. Afterward, they found the child to be undernourished, anemic and under cardiac stress.

Subsequently, the Orissa state government banned him from running until he is older.

"Use of a child, be it for a marathon run or a walk, amounts to torture and we are here to stop that," Rabi Shankar Mishra, the Child Welfare Committee's chairman, said last month. "The committee felt the walk may have an adverse impact on the child's health."

His coach said he was looking after the best interests of the boy, whose father died when he was 7 months old. His mother, unable to support him, was about to sell him to another villager for 800 rupees (US$18; euro15) when the family met Das two years ago. Das has said he has raised Singh as his son.