Polish man wakes up after 19 years in coma

A Polish railway worker who woke up after 19 years in a coma is learning to live and to understand a politically altered Poland. 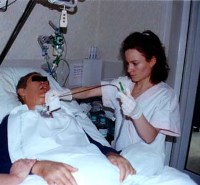 Polish man wakes up after 19 years in coma

"I could not talk or do anything, now it's much better," he said in a weak but clear voice, lying in bed at his home in the northern city of Dzialdowo.

Despite doctors' advice that he would not live, his wife Gertruda never gave up hope and took care of him at home.

"He could not move his legs or hands, he could not hold his head up. He was a living corpse," she said on TVN24.

"Now he can sit in his wheelchair and we have breakfast and coffee together," she said.

In 1988, when Poland was still run by a communist government, Grzewski sustained head injuries as he was attaching two train carriages together. He fell into a coma. Doctors also found cancer in his brain and said he would not live, according to local daily Gazeta Dzialdowska, which broke the news of his recovery.

When doctors could do no more, Grzewski's wife took him home and cared for him, sensing in him a strong will to live, even though he could not communicate, Gazeta said.

"I would fly into a rage every time someone would say that people like him should be euthanized, so they don't suffer," she told Gazeta. "I believed Janek would recover," she said, using an affectionate version of his name.

Last year, she noticed that he was trying to speak, Gazeta said. He returned to the hospital and came out of the coma some two months ago.

"At the start, his speech was very unclear, now it is improving daily," Wojciech Pstragowski, a rehabilitation specialist, said on TVN24.

"He can now move his feet, feeling has returned to his limbs and he can hold light objects."

"If he continues to make such progress, he will soon be able to walk," Pstragowski said.

He said Grzewski was shocked to see the streets and shops in the town. "He remembered shelves filled with mustard and vinegar only" under communism, Pstragowski said.

Poland shed communism in 1989 and has developed democracy and a market economy.

"I am sure that without the dedication of his wife, the patient would not have reached us in the (good) shape that he did," Pstragowski said.