Majority of adults are obese or overweight in most EU nations

A majority of adults are obese or overweight in most EU nations and the young are increasingly making Europe a fat continent. 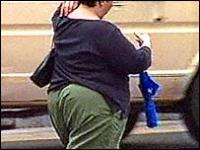 Majority of adults are obese or overweight in most EU nations

For years the EU Commission has warned governments to act but the situation is getting worse. "Everybody has to be blamed including the authorities, including the industry, including the consumers," Kyprianou said.

His biggest worry is the increasing girth of children. "If we don't act, today's overweight children will be tomorrow's heart attack victims," he said.

In the 27-nation bloc, the EU says that over 21 million children are overweight. "Even more worrying is that the rate of increase of that number is more than 400,000 children a year."

To counter the trend, the EU has already asked food multinationals to promote more healthy foods and says it has already obtained commitments to make many popular products.

But consumers consciously make bad choices too. Around the Mediterranean, a healthy diet based on olive oil and fresh fish is on the wane.

"Now the biggest problem of obesity is in the Southern member states who have abandoned the Mediterranean diet and go for same kind of nutrition of fast food as elsewhere," Kyprianou said.

Overall, the consumption of fruit and vegetables is lower than medical recommendations. The intake of fat and saturated fats is high throughout the continent. The consumption of cereals has fallen by a quarter since the 1960s in Europe.

It has contributed to a situation "in which the majority of the member states more than 50 percent of the adult population is overweight or obese."

"The numbers are frightening," Kyprianou said.

On Wednesday, the Commission proposed to tighten advertising standards on unhealthy processed food. It called on the food industry to make greater effort in reformulating products by cutting sugar, fat and salt. And the Commission wants sports organizations to do more to get youngsters to do physical exercise.

Even the best sports are becoming sweat-free, he said. "A parent said that his son would go home and play basketball on the computer. They like the game but they won't play it."

"They sit in front of a television, the computer screen or play video games," he said. "It is a reality of life."