The measures are aimed at ensuring the rules of the Netherlands famed tolerance policy are not violated, which could lead to shops being closed, said Marc Josemans, chairman of the Union of Maastricht's Coffee Shops. 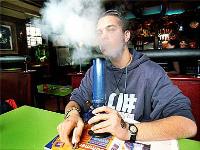 "This is not something that we are doing willingly, but with pain in our hearts," Josemans told The Associated Press in a telephone interview Wednesday. He said shops in Rotterdam and several Dutch border cities were considering following suit.

"We're very afraid we're going to lose customers over this, and to be honest we're even a little ashamed we're doing it, but the City of Maastricht has such harsh punishments that we don't feel we have any choice," he said.

Marijuana is technically illegal in the Netherlands, but cities may license shops to sell no more than 5 grams (less than a quarter ounce) per customer per day. The shops may not sell to anyone under 18, nor permit drugs other than marijuana or hashish on the premises.

Since Maastricht Mayor Gerd Leers took office in 2002, police have strictly enforced the rules, and shops found in violation are automatically closed for a minimum of three months for a single infraction, six months for a second offense, and permanently for a third.

As a result, 11 of Maastricht's 26 licensed shops have been closed, leaving just 15 open.

Josemans, who is also owner of the "Easy Going" coffee shop, said the electronic system would be tested at his store Aug. 1 and used by all licensed stores by September.

Fingerprints would be coupled with a digital photograph and a scan of customers' ID cards removing all personal information except date of birth and then stored on a computer system at the shop.

When a customer wants to buy weed, he will have to prove that he or she is of age, and has not already purchased the 5-gram limit that day at the same store.

"We're not going to give this information to anybody else, and we're not linked to each other or the Internet," Josemans said.

He said the shops already had video surveillance cameras and cooperated with police in criminal investigations, but the stored fingerprints would be too low in quality for use by police.

Because of Maastricht's location near the border with Belgium and Germany and not far from France, the city receives 4.5 million "drugs tourists" per year who come just to buy weed and then drive home again.

City spokesman Math Wijnands said the drug trade brought a host of problems with it, most notably petty criminals who seek to sell marijuana or other drugs in the neighborhood of the licensed coffee shops.

"They know that they have a target group here, but they go about their business in an aggressive manner," Wijnands said. "That causes problems in the city center."

The city is currently negotiating to move more than half of the remaining shops to the outskirts of town angering neighboring countries like Belgium who object to what amount to marijuana drive-through stores on their doorsteps.

Wijnands confirmed that the city was aware of the plan by the shops to store customer data, and approved.

"If they're going to take ID checks into their own hands and obey the rules as much as possible, then that's only to be applauded," he said.

Josemans said the system had been vetted with the Netherlands' digital privacy watchdog, known by its Dutch acronym CBP, and did not violate any laws. A CBP spokeswoman could not immediately confirm that.