Kelly Preston and her husband, John Travolta, were hosting a lavish dinner celebration Thursday to support a new rehab center in Hawaii. 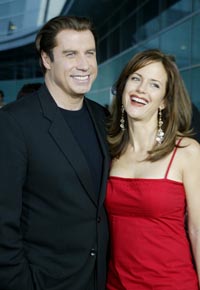 "This is my baby," Preston told The Associated Press of her efforts to provide drug education, prevention and rehabilitation services.

A Hawaii native, Preston said she came home to help address the islands' growing problem with crystal meth. She started three years ago, working with school and government officials to launch Narconon Hawai'i, a drug-education program in schools.

Thursday's $2,500 (euro1,859)-a-seat dinner will raise money to support that program as well as a new residential drug-rehabilitation facility. The 60-bed Narconon Hawai'i center is expected to open in "two to three months," Preston said.

"This is my first one," she said. "I would love to continue doing it on the islands - on each of maybe four or five of the main islands - and I'd love another one also here, a juvenile facility."

Narconon is a worldwide drug rehab network with facilities in 40 countries. It is based on the principles of L. Ron Hubbard, founder of Scientology.

Preston and Travolta, who have been married 15 years, are both Scientologists.