Polish doctors launched a nationwide open-ended strike, demanding a pay raise amid complaints that the national health system is underfunded and medical professionals are overworked. 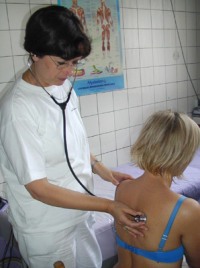 More than 200 of the nation's roughly 600 state hospitals were providing only emergency services, said Krzysztof Bukiel, head of the All-Poland Doctors' Union. Another 100 hospitals were set to join the strike if a settlement was not reached quickly, he said.

Prime Minister Jaroslaw Kaczynski said the doctors' demands were unrealistic this year, adding that such a pay hike would cost an estimated 11 billion zlotys (US$3.9 billion; EUR2.9 billion) and would "break public finances." He said health care wages should increase starting next year.

The doctors have suggested charging patients nominal fees for some services to help fund changes to the health system. Basic health care in Poland is free.

Low wages have forced doctors to take additional jobs in private clinics, and thousands of doctors and nurses have moved abroad for better-paid jobs, primarily to Britain and Ireland, since Poland joined the European Union in 2004.

The lack of funds has plagued Poland's state health care system and provoked strikes and street protests since the collapse of communism in 1989.