Friends and fans of Fats Domino were emotional as the 79-year-old rock legend took the stage in a New Orleans nightclub, marking his first public performance since before Hurricane Katrina. 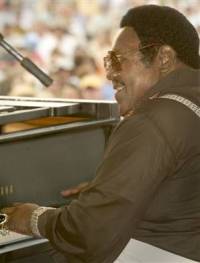 "He's been through so much, like a lot of us. It was great to see him out there. It really was," said Art Neville, one of the four original Neville Brothers, just moments after Domino performed a string of hits, including "I'm Ready," "Ain't That a Shame," "Shake, Rattle and Roll" and "Valley of Tears."

Domino last performed in public on Memorial Day 2005. Three months later, he lost his home, his pianos, his gold and platinum records, and much of the city he loves during Katrina. He was rescued by boat from his flooded home after the storm struck on Aug. 29, 2005.

In May 2006, Domino was scheduled to close the New Orleans Jazz and Heritage Festival, but his nerves got the better of him and he canceled his performance just hours before he was to take the stage.

Domino turned 79 in February. In March, he walked through his flood-ravaged house, which was under renovation, saying he is ready to be home.

The Tipitina's Foundation, which put on Saturday night's show, is working to help. The foundation has teamed with such artists as Elton John, Tom Petty, Bonnie Raitt, Lenny Kravitz, Willie Nelson, B.B. King, Paul McCartney and others to record a tribute album of Domino's songs.

Proceeds will benefit the foundation, a nonprofit dedicated to providing the city's public schools with instruments and helping artists recover from the hurricane. Roughly 25 percent of the proceeds will go toward the restoration of Domino's home, which is expected to cost more than $100,000 (EUR74,200), said Bill Taylor, the foundation's executive director.

Domino is expected to move back in this summer a sign of hope for many in the heavily devastated neighborhood.

"So long, so long, I'm goin' home," Domino sang, closing out the show.