Anti-discrimination law in Massachusetts proposed to add "weight and height"

Legislation to add "weight and height" to anti-discrimination law in Massachusetts has been proposed to give special protection to short and fat people. 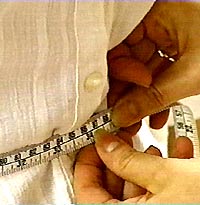 Anti-discrimination law in Massachusetts proposed to add "weight and height"

The bill, which would make Massachusetts the second state in the United States to offer such protections, applies mainly to the workplace but also covers landlords and real estate interactions.

Rep. Byron Rushing, a Boston Democrat who is sponsoring the bill, said it is a question of civil rights.

"This is one of the last physical aspects of people that you can acceptably laugh about," said Rushing, who is black, slim and of average height. "You can be a shock jock on the radio and talk about fat people for a solid week and no one would ever think of having you lose your job. It's still acceptable."

Ellen Frankel, who stands 4-foot-8Ѕ (1.4-meter), recalls being playfully scooped up by larger co-workers, who also would pat her on the head and remark about her height.

"People in authority will very easily make comments about height that they would not make about race or gender," said Frankel, a Marblehead author and mother of two.

Jeanne Toombs understands Frankel's frustration. The board member of the National Association to Advance Fat Acceptance says overweight people routinely are discriminated against because of their size.

"It's not fair. No matter what you think of fat people, they deserve to be treated like human beings," said Toombs, 59, a piano teacher who weighs 300 pounds (136 kilograms).

Most U.S. states have laws prohibiting discrimination based on race, color, religion, age, gender, disability, and other factors. A handful offer protection for gays and lesbians. But only Michigan and Washington D.C. include weight and height in their anti-discrimination law.

The problem at least with weight is not going away. Federal government statistics show that U.S. obesity rates have risen to an all-time high. Nearly one-third, or 32 percent of adult Americans, are considered obese, at a time when employers are considering ways to demand healthier behavior, such as no smoking.

Not everyone is convinced people with height and weight problems need legal protection from discrimination.

"We might as well add colorblind, left-handed, allergic-to-cashews, and get it over with," said Todd Domke, a Republican analyst.

Domke envisions Massachusetts scaring off businesses if it expands the protections to include short and overweight workers.

"There's a limit on how far you can legislate your way to paradise," he said. "Good intentions don't necessarily make for good legislation."

The courts are not convinced, either. Because there is no specific protection, people claiming discrimination in the workplace or for housing must prove in court that their weight problem is a disability _ which is a protected class in state law. Massachusetts courts, however, usually reject such claims.

"People can lose weight," said David Yas, publisher of Massachusetts Lawyers Weekly. "As that line of argument goes, why receive special treatment? There is some of that attitude in the courts that this should not rise to the level of race and gender the rights of which are so important to protect."

Cases tossed out of court include a 6-foot (1.8-meter), 285-pound (129-kilogram) man who sued Shaw's Supermarkets, claiming he was denied a job because of his weight; and a 230-pound (104-kilogram) woman who sued a Natick car dealership after being denied a receptionist job.

Rushing said advocates were shunned by lawmakers 10 years ago when he proposed a similar bill. He is more confident of passage now because of an increased awareness of the issues. He expects a hearing this fall.

Frankel acknowledges the bill may be a hard sell, because it does not define short or fat. She said it is still socially acceptable to denigrate short and overweight people.

Toombs does not buy the argument she can simply diet and lose weight.

"I spent 25 years of my life trying to get thin," she said. "All I ever got was fatter, and I felt like a failure. I thought it was my fault, and it wasn't. People come in different sizes, they always have and they always will."