Paris Hilton's jail time could be cut in half

Paris Hilton may spend far less than the 45 days she has been sentenced to serve in county jail for violating probation because of state policies and jail overcrowding, authorities said Thursday. 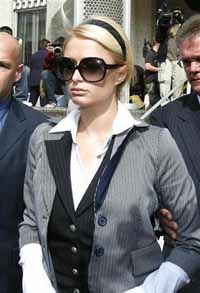 Paris Hilton's jail time could be cut in half

Hilton could spend three weeks or less behind bars because of a state requirement that grants inmates time off for good behavior and because of overcrowding in the system that has led to freeing some inmates before they complete their full terms, Los Angeles County sheriff's spokesman Steve Whitmore said.

As for overcrowding, "our jail is bursting at the seams" and some women inmates have been released after serving only 10 percent of their sentence, Whitmore said.

Last year, "Lost" actress Michelle Rodriguez was sentenced to 60 days in jail for violating probation after her drunken driving arrest in Hawaii. She was released in hours because of overcrowding.

Hilton's time will be determined when she is booked into the county system, Whitmore said.

She will not receive any favors because she is a celebrity, he added.

"She's going to be treated like any other low-level security risk."

"She will be treated like any other inmate who's classified as a low-level security risk," Whitmore told the Los Angeles Times, which first reported the development on its Web site.

A call to Hilton's publicist seeking comment was not immediately returned.

Hilton, 26, was sentenced to jail last week for violating the terms of her probation in an alcohol-related reckless driving case. A judge ordered her to report to the women's jail in Lynwood by June 5.

Hilton intends to appeal and her fans have posted a petition on the Internet urging Gov. Arnold Schwarzenegger to pardon her.

She stars in the reality-TV series, "The Simple Life," now in its fifth season, with Nicole Richie. She appeared in the 2005 film, "House of Wax" and recently finished filming "The Hottie and the Nottie." She also is a handbag designer and has a namesake perfume.