The survival of a major "Lost" character was left in doubt this week in an episode that shot adrenaline into the plot of the ABC series but failed to give it a needed ratings boost. 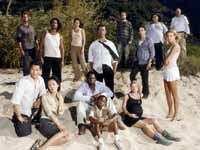 The Wednesday episode in which Locke (Terry O'Quinn) was shot, perhaps fatally, by Ben (Michael Emerson), the leader of "the Others," drew 12.1 million viewers. That's about the same sized audience the show has been attracting in recent weeks.

That compares to the 22 million-plus "Lost" drew at its peak last season, its second. Still, the drama about plane-crash survivors on a mysterious island has been winning its 10 p.m. time slot among the young adult viewers prized by advertisers.

"Lost" also is building its audience within the hour, demonstrating that viewers who tune in like what they see. In this week's pivotal episode, the audience got a history lesson about Ben's troubled childhood and a clash between two island factions.

Given Locke's importance to the show, the odds seem to be in his favor. But the producers have never been queasy about killing off characters who survived the crash but not the show's complex plot twists.

ABC's recent announcement that the show will conclude in the 2009-10 season also might have fans wondering if Locke's shooting is a shocking early start to the show's ultimate resolution.