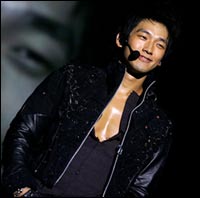 Rain, who draws a huge audience throughout Asia with his sculpted body and dance moves, is "in positive" negotiations with the filmmaker, said the manager, who spoke on condition of anonymity because the deal was not yet completed.

He said Rain's participation in the movie based on "Mach Go Go," a 1960s Japanese animated series about car racing will be announced "soon." He declined to give further details.

Andy and Larry Wachowski, creators of "The Matrix" movies, plan to shoot the new film in Germany this summer and Warner Bros. plans to release it in May next year, the manager said.