Bollywood actor John Abraham hurt his shin while playing soccer in the climactic scene of his movie "Goal," the film's director said. 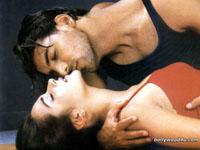 "John was on the field with all the other actors and that's when he felt this sudden pain in his shin," Agnihotri told the Mumbai Mirror newspaper. "We immediately called a doctor and a physiotherapist. John was in a lot of pain."

He said Abraham also used acupressure to relieve his pain.

Agnihotri hired trainers in London to help his actors practice their moves on the soccer field while filming the movie last month. It will hit the screens later this year.

Abraham, one of India's top models, made his movie debut three years ago and struck fame in the 2004 action adventure "Dhoom." He is often voted one of the Indian movie industry's sexiest stars.

Abraham has won praise for his role as a law student who falls in love with a woman living in a widow's home in his most recent film, "Water." The film deals with the harsh treatment meted out to widows in 1930s.