Breathing through a snorkel and gliding in about 14 feet (4 1/4 meters) of water, Peller Marion was peering at the underwater world through goggles when she thought she felt a turtle tugging at her right fin. And then there was a sharp pain. 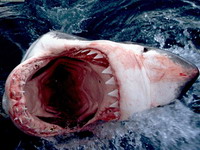 When the 63-year-old California woman looked back, she saw a big, gray "thing" and realized the turtle was actually a shark chomping on her leg.

"The energy was so... I knew what it was," Marion said in a telephone interview Tuesday, a day after she was attacked off Keawakapu Beach in Kihei, Maui.

After a moment of shock, she managed to swim 25 yards (23 meters) to shore, where she stumbled onto the sand. Her bloody foot was ravaged.

"It sort of looked like a slab of steak cut to the bone. That's how it looked on the front and on the calf," said Marion, a psychologist and author from Marin County.

Despite going through the most horrific experience of her life, Marion was in good spirits while recovering at Maui Memorial Medical Center with a cast on her wounded leg.

The attack was reported at 8:34 a.m. by a bystander on the beach, about an hour after a nearby beach was closed due to a report of a shark bumping a surfer.

At 7:30 a.m., a surfer reported that his friend's surfboard was bumped by what appeared to be a tiger shark at Kamaole Beach Park II, prompting a closure of that beach and a shark alert by the county.

Maui County spokeswoman Mahina Martin said when a shark is sighted, one mile of coastline is closed.

Keawakapu is a mile and a half (two kilometers) from where the shark was spotted, so it was not closed and beachgoers were not warned.

Marion said if she had been warned, she would not have entered the water.

After the attack, the closure was expanded to a four-mile (6 1/2 kilometer) stretch of South Maui beach. Lifeguards on Tuesday reopened the area after officials surveyed the area by air.

Marion will spend about five more days in the hospital, because of the threat of infection. She will then resume her Hawaiian vacation before returning home.

She didn't seem too upset by her encounter with one of the most feared creatures in the sea.

"It's nature," she said. "I'm just surprised it was me. I would like my fin back. He took just one."

The last shark attack in Hawaii occurred in November in the same area. Kyle Gruen, 29, was bit by a shark he estimated to be six to 10 feet (two to three meters) long while swimming 10 yards (9 meters) off Kamaole. Gruen, of Vancouver, British Columbia, suffered injuries to his hand and leg.

It was one of four Hawaii shark attacks in 2006. None was fatal.

Marion, an avid swimmer, said the attack won't keep her away from the ocean.

"I'm not going to be able to go in the water for quite some time because of my foot, but I'll eventually go back in the water," she said. "What a fool."