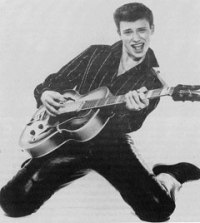 Just two days after Sarkozy won the presidency race, French rock legend Johnny Hallyday has decided to return from Switzerland where he was living to avoid high taxes.

In a much-publicized departure, Hallyday moved to Gstaad late last year to avoid heavy French taxes. The move came in the heat of the election campaign, in which Hallyday openly backed Sarkozy - a conservative who pledged tax cuts - over his Socialist rival Segolene Royal.

Asked on RTL radio Tuesday whether they would come back to France now that Sarkozy is taking over, Hallyday's wife Laeticia said, "Yes." She did not say when.

Sarkozy has proposed that income tax be limited to no more than 50 percent, down from a 60-percent upper limit that will go into effect in January.

"Nicolas wants to limit the taxes to 50 percent. That means working half the year for the state, and not three-quarters of the year," Laeticia Hallyday said. "We love France and we love our life in France."

In leaving for Switzerland, the 63-year-old singer - the closest thing France has to Elvis, known fondly by much of the population as "Johnny" - prompted a heated debate in France about rich people and multinational companies fleeing for less-taxed lands.

Each Swiss canton (state) sets its own tax rates, and can allow prominent foreigners to pay a fixed tax based on expenses or assets in Switzerland rather than a portion of their income.