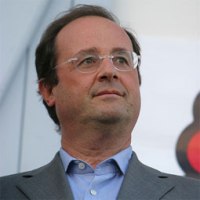 While the unrest has been small-scale, it sent a message to Nicolas Sarkozy: He may have won the presidency, but he hasn't won over the many French who consider him - and his free-market reforms and tough line on crime and immigration - frighteningly brutal.

Sarkozy, who beat Socialist Segolene Royal in a runoff Sunday, is a divisive figure whose tough language and crackdowns on crime and immigration have angered many on the left - and in the immigrant-dominated suburban housing projects that exploded into rioting in 2005.

Late Monday night, several hundred people massed again at the Place de la Bastille in Paris, breaking windows in nearby shops and starting street fires. Riot police dispersed them, and about 100 people were arrested, police said Tuesday. A handful of cars were torched in the area.

"To all those who can hear me, I ask them to immediately stop all this behavior," Socialist Party chief Francois Hollande said Tuesday on RTL radio.

"We are in a republic, where universal suffrage is the only law we know. There can be disappointment, there can be anger, there can be frustration. But the only way to react is to take up your ballots, not other weapons," he said.

Socialist candidate Royal had warned of renewed violence in case of a Sarkozy victory, and had sought to make the campaign a referendum on Sarkozy's polarizing persona.

But voters favored Sarkozy anyway, handing him a mandate for reforms that include tax cuts and new labor rules making it easier to hire and fire to revive the sluggish economy. He faces a steep challenge in carrying this out in a country that cherishes its generous social safety net.

Sarkozy himself was on a yacht in the Mediterrannean, taking time to relax before he takes over from Jacques Chirac on May 16.

While some criticized Sarkozy for disappearing right after his victory, Hollande was more understanding. "I find it normal that after a campaign that was also difficult for him, he needs rest," Hollande said.

The Socialists and Sarkozy's UMP party are now looking ahead to parliamentary elections June 10 and 17. The UMP needs a majority to keep his mandate for reforms. A win by the left would bring "cohabitation" - an awkward power-sharing with a leftist prime minister - which would put a stop to his plans.

Sarkozy has drawn up a whirlwind agenda for his first 100 days in office and plans to put big reforms before parliament at an extraordinary session in July. One would make overtime pay tax-free to encourage people to work more. Another would put in place tougher sentencing for repeat offenders, and a third would toughen the criteria for immigrants trying to bring their families to France.