Lindsay Lohan to celebrate her 21st birthday from Vegas to Malibu

Lindsay Lohan will not be satisfied with a cake and some candles when she turns 21. 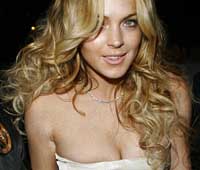 Lindsay Lohan to celebrate her 21st birthday from Vegas to Malibu

The raspy-voiced actress, who celebrates her big birthday on July 2, said Wednesday on "The Ellen DeGeneres Show" that she plans to "milk it" when she becomes old enough to legally go to clubs.

Lohan said turning 21 has "been a long time coming" for her friends who own clubs in Los Angeles. After she's legal, "they don't have to worry about getting into trouble," for letting her inside, she told host Ellen DeGeneres.

She'll celebrate by partying in Vegas, she said, and also with a dinner in Malibu, Calif., with family and friends.

Lohan, who stars opposite Felicity Huffman and Jane Fonda in the upcoming Universal Pictures film "Georgia Rule," also showed off a white tattoo of the word "breathe" on the inside of her wrist.

"And it's `breathe' because?" asked DeGeneres.