Singer Joan Baez not allowed to perform at US Army hospital

Folk singer and anti-war activist Joan Baez says she does not know why she was not allowed to perform for recovering soldiers recently at a U.S. Army hospital as she planned. 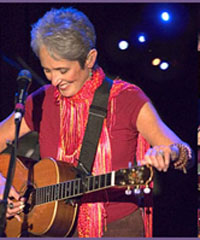 Singer Joan Baez not allowed to perform at US Army hospital

In a letter to The Washington Post published Wednesday, she said rocker John Mellencamp had asked her to perform with him last Friday at Walter Reed Army Medical Center and that she accepted his invitation.

"I have always been an advocate for nonviolence and I have stood as firmly against the Iraq war as I did the Vietnam War 40 years ago," she wrote. "I realize now that I might have contributed to a better welcome home for those soldiers fresh from Vietnam. Maybe that's why I didn't hesitate to accept the invitation to sing for those returning from Iraq and Afghanistan. In the end, four days before the concert, I was not 'approved' by the Army to take part. Strange irony."

The Post reported that Walter Reed officials did not respond to requests for comment Tuesday, but that in an e-mailed statement published Monday on RollingStone.com, spokesman Steve Sanderson said the medical center received the request for participation by Baez just two days before the concert.

"These additional requirements were not in the agreement/contract and would have required a modification," Sanderson told the magazine's Web site.

But Mellencamp earlier told RollingStone.com: "They didn't give me a reason why she couldn't come. We asked why and they said, 'She can't fit here, period."'

Walter Reed is one of the Army's main medical facilities for treating injured soldiers returning from Iraq and Afghanistan. The Defense Department came under criticism earlier this year after disclosures of poor outpatient care at the center.