Federal officials have dismissed charges against an Atlanta man who was accused of trying to extort $1.5 million (EURO1.1 million) from TV talk show host Oprah Winfrey. 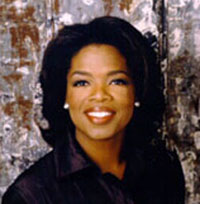 In exchange, Keifer Bonvillain, 36, must successfully complete a yearlong program in which he has to perform 50 hours of community service, undergo drug testing, attend school or work regularly and pay $3,000 in restitution to the FBI for the cost of its investigation, U.S. attorney's office spokesman Randall Samborn said Tuesday.

"His successful completion of the program will result in no further prosecution in connection with this matter," Samborn said.

Bonvillain had been accused of targeting a person identified only as "a public figure and the owner of a Chicago-based company," according to a criminal complaint filed in December in U.S. District Court.

Federal officials have declined to comment on the public figure's identity. An individual close to the investigation, speaking only on condition of anonymity because the public figure's name has not been revealed in open court, told The Associated Press that the figure is Winfrey.

According to the complaint, Bonvillain met a California-based employee of the Chicago company at a party more than two years ago, then recorded conversations with the employee about the owner and her business.

In mid-October he sent the owner an e-mail, telling her an employee had said awful things about her, the complaint states. A month later, Bonvillain sent a letter saying he had tapes of the conversations, an FBI agent alleges in the complaint.

Over the next few weeks, Bonvillain told the associate he wanted to publish a book based on the tapes and claimed he had received offers of $500,000 to $3 million from tabloids and book publishers, the complaint said.

The associate, who was working with the FBI, agreed to a $1.5 million price, wired Bonvillain $3,000 and arranged to meet him, the complaint said.

Bonvillain was arrested Dec. 15 in the parking lot of an Atlanta hotel and released on $20,000 bond.