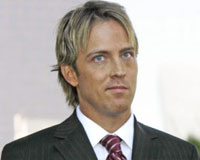 Ex-boyfriend of Anna Nicole Smith quietly left the Bahamas aboard a chartered plane with their 7-month-old daughter Tuesday, an entertainment-news program having a television crew aboard said.

Birkhead, a 34-year-old photographer based in Los Angeles, was authorized by a judge last week to take the girl out of the country. The ruling followed legal battles by Birkhead to prove his paternity claim and gain custody following the former Playboy Playmate's death in February.

A new Bahamian birth certificate listing Birkhead as the father was issued in line with a court order last week, removing the name of Smith's last companion, Howard K. Stern. Stern had been caring for the girl in the oceanfront home in the Bahamas he shared with Smith.

Birkhead, a Kentucky native, has family in Louisville and met the former Playboy Playmate there at a Kentucky Derby party in 2003.

A publicist for "Access Hollywood," which has promoted its planned coverage of a family reunion in Kentucky, said the program did not compensate Birkhead for its exclusive access. She said the program's parent company, NBC Universal, does have a deal with him but she could not describe the terms.

"We are excited to finally bring everybody back from the Bahamas, including Larry and Dannielynn, for a happy homecoming," said the publicist, Jennifer Minezaki.

Birkhead for months feuded with Stern and the late reality TV star's mother, Virgie Arthur. Although Stern came to support Birkhead after DNA tests proved his rival to be the father, Arthur has kept up her bid for custody while seeking a visitation agreement.

An appeals court rejected a last-ditch effort by Arthur to block Birkhead from leaving with the girl. The grandmother argued he might not return as directed for a June 8 hearing in their custody dispute - an accusation Birkhead denied.

It is the first trip out of the Bahamas for Dannielynn Hope Marshall Birkhead, who was born in September only three days before Smith's adult son Daniel died at her hospital bedside from a lethal combination of drugs.

Smith, 39, collapsed and died in February from an accidental drug overdose. She was buried beside her son at a Nassau cemetery.

Legal wrangling continues over the estate of Smith's late husband, Texas oil tycoon J. Howard Marshall II, who died in 1995. It remains unclear how much, if any, of Marshall's fortune Dannielynn might inherit and whether her guardian would have access to the money.