Dressed in white and spattered in blood, members of the tiny Samaritan sect gathered until the early hours for one of the Holy Land's most colorful religious ceremonies the nighttime Passover sacrifice. 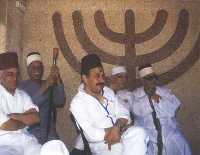 The entire Samaritan community, which totals just over 700 people, was present for the sacrifice at the sect's holiest place, the West Bank hilltop of Mt. Gerizim, near the city of Nablus.

Like the Jewish holiday of Passover, which was celebrated in early April, the Samaritan holiday marks the Israelite exodus from Egypt as recounted in the Old Testament. The Samaritans practice a religion closely linked to Judaism and venerate a version of the Old Testament, but are not Jews, and have a different religious calendar.

The sect's high priest opened the ceremony with a prayer in the Samaritan tongue, a dialect of ancient Hebrew. Then ritual slaughterers killed sheep, skinned them, and roasted them in large ovens. According to tradition, the meat must be ready in the middle of the night the time that the Angel of Death killed the Egyptian firstborn in the biblical story  and the Samaritans eat it in haste along with unleavened bread, emulating the ancient Israelites.

Named for Samaria, a region in the northern West Bank, the Samaritans believe themselves to be the remnants of Israelites exiled from the Holy Land by the Assyrians in 722 B.C. They are probably best known for the parable of the Good Samaritan in the New Testament's Book of Luke.

In the fourth and fifth centuries, the Samaritan population is thought to have topped 1.5 million, but religious persecution and economic hardship nearly erased it by the early 20th century. Half live in the West Bank, and the other half live in the Israeli city of Holon, near Tel Aviv.