Sarkozy's rivals paint him as dangerous 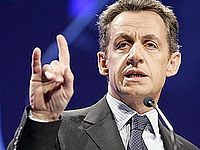 Sarkozy's rivals paint him as dangerous

To achieve a dream of presidency, Nicolas Sarkozy seems to use any measures - fair or foul. A former ministerial colleague said that conservative even threatened to beat him up for some disagreement.

Ten days from France's decisive and pivotal presidential vote, Sarkozy's rival - Socialist Segolene Royal - is making his supposed bullying a major campaign issue. She has called him the "bogeyman," "dangerous" and "unstable," and on Friday accused him of clamping down on the media.

In sum, the May 6 election could be as much a referendum on Sarkozy's personality as on his platform of economic reform and toughened anti-crime measures. If Royal is to become the first woman president of France, she needs to quickly find some way to weaken Sarkozy: He finished five percentage points ahead of her in last Sunday's first phase of voting, and polls still make him the front-runner with only a week of campaigning left.

The result hinges on voters in the middle ground of France's traditional left-right divide, who made farmer's son Francois Bayrou the best-placed loser last Sunday, with nearly 7 million votes.

Royal and Sarkozy are both going after Bayrou's voters - him by cultivating a softer, more humanistic image; she by seeking to organize a televised debate with Bayrou, which Royal hopes might demonstrate to his voters that they are not diametrically opposed politically.

But instead of being a simple matter, the Bayrou-Royal debate blew up into a political melodrama when TV station Canal Plus backed out of holding it. Immediately, Sarkozy - who has powerful friends in the French media and business worlds - got the blame.

Sarkozy's camp "is trying to control everything through very powerful links to finance and the media," Royal herself said.

Canal Plus denied that it bowed to pressure from Sarkozy, and he denied having any role.

"It's rather insulting to journalists to think that they could obey orders," Sarkozy said.

It was not the first time that Sarkozy has faced accusation of leaning on the press.

After Paris Match magazine published photos of Sarkozy's wife in the company of another man in 2005, executive editor Alain Genestar was forced out. Genestar said Sarkozy was behind his dismissal, a charge Sarkozy denied.

Another case also involved Sarkozy's wife, Cecilia. Author Valerie Domain's biography was pulled shortly before publication. Mrs. Sarkozy acknowledged in an interview at the time that she asked her husband to intervene to stop its publication, even though she had given Domain an interview.

Polls have named Sarkozy as front-runner since the start of the year, but he is a deeply divisive figure. Voters often use the word "scary" to describe him. Part of that is because of his tough language - famously, he once called young delinquents "scum."

The former minister for equal opportunities, Azouz Begag, says in a book published this month that Sarkozy showered him with expletives and shouted, "I'll smash your face!" during a disagreement over a law to limit immigration.