Andrew Lloyd Webber is up and Paul McCartney is down in an annual list of Britain's richest music figures, released Friday. 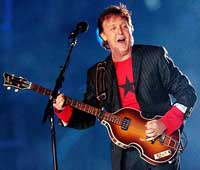 Lloyd Webber's fortune was valued at 750 million pounds (US$1.5 billion; EUR1.1 billion) by the Sunday Times' annual Rich List, up 50 million pounds from last year. The 59-year-old composer has had a good year thanks to his role as producer of a West End revival of "The Sound of Music," whose star was chosen by a reality TV program.

He was in second place on the music list behind Clive Calder, the former Zomba records label boss whose acts included Britney Spears and 'N Sync. Calder's fortune was estimated at 1.3 billion pounds (US$2.6 billion; EUR1.9 billion).

The newspaper's full list of the 1,000 wealthiest Britons will be published on Sunday.