Angelina Jolie pushed Thursday for more U.S. aid for education in developing countries during an event to help an orphans advocacy group establish its headquarters in the United States capital. 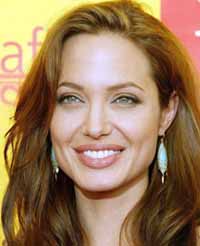 "This is a happy day because it is not often enough that these children are represented in this town," Jolie said to a room crowded with cameras and reporters.

Jolie appeared with four others to open the Washington headquarters of Global Action for Children, a nonpartisan advocacy group formed in 2003.

The group, supported by a collection of charities, religious groups and nongovernmental organizations, wants the Bush administration to commit an additional $2.5 billion a year to education and to aiding orphans in developing countries.

Jolie said orphan children sometimes beat the odds and survive but often are enslaved, resort to prostitution or are forced to become child soldiers. She said vulnerable children could be recruited to join terrorist organizations.

"Our government has the power to choose which path these children are going to take," Jolie told reporters at the National Press Club. "We know the consequences of our inaction."

Jolie has adopted three orphan children, but said any help that people in the U.S. can offer is better than nothing. "The best solution for anyone who is abandoned or displaced is to be home (in their own countries)," Jolie said. "I would support that first and foremost."

Jolie demurred when asked if her cause might be better served if she became more political or ran for elective office. "I certainly don't think anybody wants that," she said, laughing.