A woman obsessed with Sandra Bullock tried to run over the actress' husband Jesse James in a confrontation outside the couple's home, authorities said. 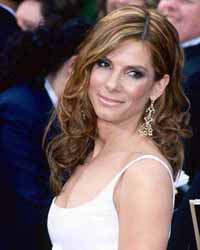 Marcia Diana Valentine, 45, of Huntington Beach tried to run over James, host of "Monster Garage," with her silver Mercedes after Bullock asked her to leave the couple's home on Sunday, said Jim Amormino, an Orange County sheriff's spokesman.

"She jumped in the car, put it in reverse and accelerated in his direction," Amormino said Thursday. "She attempted to hit him three or four times."

James was not injured, and Valentine fled before authorities arrived, he said.

Authorities said it was not the first time Valentine showed up at the celebrity couple's home. On several prior occasions, Bullock and James had found Valentine lying in front of their garage door, Amormino said.

Valentine was arrested Monday for investigation of assault with a deadly weapon. She was released after posting $25,000 (EUR18,000) bail. A court hearing was scheduled for May 22.

"Both Jesse James and Sandra Bullock are fine, and it is now in the hands of authorities," said Cheryl Maisel, Bullock's publicist.

Valentine could not be reached for comment. It was not immediately known whether she had hired an attorney.