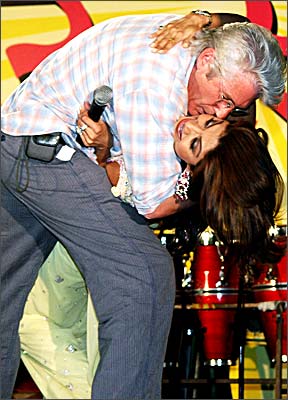 It seems that Hollywood movie star Richard Gere and Bollywood star Shilpa Shelty will never more  kiss at a public function in India. An Indian court issued arrest warrants for them.

Judge Dinesh Gupta issued the warrants in the northwestern city of Jaipur after a local citizen filed a complaint charging that the public display of affection -which he called an "an obscene act" - offended local sensibilities, the Press Trust of India news agency reported.

Such cases against celebrities - often filed by publicity seekers - are common in conservative India. They add to a backlog of legal cases that has nearly crippled the country's judicial system.

It was not immediately clear how the warrant would affect Gere, a frequent visitor to India.

Under Indian law a person convicted of public obscenity faces up to three months in prison, a fine or both.

Last week, crowds in several Indian cities burned effigies of Gere, 57, after he wrapped the 31-year-old Shetty in his arms and kissed her several times on her cheeks during an HIV/AIDS awareness event in the Indian capital.

Photographs of the clinch were then splashed across front pages in India - where public displays of affection are largely taboo.

"It has detracted from and undermined the value and success of the event, which was concerned with creating AIDS awareness and promoting AIDS prevention among truck drivers," CNN-IBN quoted her as saying.

Shetty has said the embrace was not obscene and that the media should instead focus on HIV/AIDS awareness.

Shetty, already well-known in India, became an international star after her appearance on the British reality show "Celebrity Big Brother" - another controversial public appearance. A fellow contestant, Jade Goody, sparked international headlines by making allegedly racist comments to Shetty. Mobs took to the streets of India to denounce Goody, and Shetty went on to win the competition.

Gere's screen credits include "Chicago," "Pretty Woman" and "An Officer and a Gentleman."