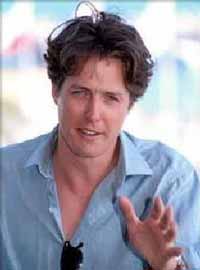 Police in London have arrested actor Hugh Grant after he allegedly threw a container of baked beans at a photographer.

Photographer Ian Whittaker told the Daily Star tabloid that the "Four Weddings and a Funeral" actor, 46, had kicked him and shouted abuse before hurling the beans at him on Tuesday morning. The newspaper ran photos Wednesday showing Grant holding a plastic tub over his head.

The Metropolitan Police does not identify suspects who have not been charged, but said a 46-year-old man was arrested Wednesday night on suspicion of assault and released on bail. No charges had been laid, police said.