Anna Nicole Smith's ex-boyfriend said Wednesday that efforts were under way to change his 7-month-old daughter's birth certificate to list him as the father. 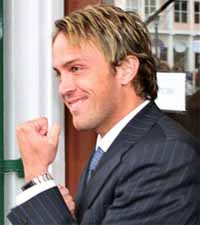 Larry Birkhead was revealed as the father by DNA tests earlier this month. He and other participants in a private custody hearing Wednesday said they could not discuss the proceedings, but Birkhead said he was pleased.

"I guess all I can say really is that it was a good day for me in court," he said.

Virgie Arthur, the mother of the dead reality TV star, has been trying to reach a visitation agreement with him that would end her legal challenge for custody of the girl. After the Supreme Court hearing, she left in a taxi without speaking to reporters.

The judge scheduled another hearing in the custody case for June 8.

Birkhead, a 34-year-old photographer based in Los Angeles, California, said efforts were "in the works" to obtain a passport for Dannielynn and change her birth certificate to remove the name of Howard K. Stern, Smith's last companion. He said he hoped to leave the Bahamas for the United States with her "pretty soon."

Birkhead left the courthouse in a black Cadillac sport utility vehicle with Stern, who has been caring for the infant since her mother died in February, and supports Birkhead in the custody battle.

"I just want Dannielynn to have a good life," Stern said.

The girl could potentially inherit a fortune if lawyers resolve challenges over her mother's estate in her favor. When she died of an accidental drug overdose in a Florida hotel room, lawyers were still wrangling over the estate of Smith's late husband, the Texas oil tycoon J. Howard Marshall II, estimated to be worth more than US$1 billion (EUR732 million).

Smith gave birth to Dannielynn in September only days before her 20-year-old son Daniel died of a drug overdose at her bedside.