NBC does not let Alec Baldwin fight for his parental rights

Divorced dad Alec Baldwin, caught yelling at his daughter on a voicemail message, said he asked TV network NBC to let him out of his "30 Rock" contract so he can devote his time to the issue of "parental alienation." 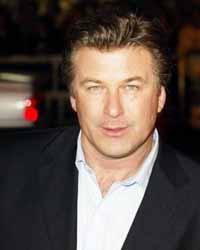 NBC does not let Alec Baldwin fight for his parental rights

"If I never acted again I couldn't care less," Baldwin said in a pre-taped appearance for ABC's "The View," scheduled to air Friday.

The actor, in a transcript provided to The Associated Press by "The View," said that he also wanted to quit "30 Rock" so the sitcom and the hundreds who work on it would not "be hurt by the situation."

NBC, however, quickly shot down the idea. The actor has became a key asset for the freshman sitcom, stealing the show as an oily but charming network executive overseeing a "Saturday Night Live"-type program.

"Alec Baldwin remains an important part of `30 Rock.' We look forward to having him continue his role in the show," NBC said in a statement Wednesday.

A network spokeswoman said she did not know how many seasons his contract covered. A call to Baldwin's publicist in New York was not immediately returned.

Baldwin intends to fulfill his obligation to the show, a source close to the actor said Wednesday, speaking on condition of anonymity because he was not authorized to make a statement.

"30 Rock," created by and starring "Saturday Night Live" alumna Tina Fey, has been renewed for a second year. Production wrapped in March and the season finale airs Thursday for the show that has gotten rave reviews but mediocre ratings.

Baldwin and ex-wife Kim Basinger have been embroiled since their 2002 divorce in a custody dispute over their daughter, Ireland, 11. It boiled up recently over Baldwin's telephone message for his daughter, berating her as a "rude, thoughtless little pig" for missing his call.

A tape of the message was obtained by celebrity Web site TMZ.com and broadcast worldwide. The actor blamed his former wife for leaking the tape, which she denied.

Baldwin was interviewed on "The View" by Barbara Walters and Rosie O'Donnell. (O'Donnell announced Wednesday she would be leaving the show after she and ABC failed to come to terms on a contract.)

Walters asked Baldwin about his harsh remarks to his daughter.

"You didn't mean to say it to your child?" she said.

"Well, there's nothing wrong with being frustrated or angry about something," he replied. "It's the way you do it, and as people often do in this world, I took it out on the wrong person because I'm unable, under the current dynamic, to address the other person."

"I realize that was wrong," Baldwin added.

"You said it to your daughter, but you meant it for your ex-wife?" Walters asked.

"Well, I think that goes without saying, quite frankly," Baldwin said.

Asked by Walters if he had spoken to his daughter since and how things stood, Baldwin declined to answer, citing "ongoing procedures and so forth."

The next hearing on visitation issues is scheduled for May 4.

According to the partial transcript from "The View," Baldwin said he intended to take "three years or five years, it doesn't matter," and focus on the problem of divorced parents and their children. He has a book coming out about divorce litigation, possibly this fall, he said.

"There were bills that were proposed (by California lawmakers) that were killed which were about equality and co-parenting and divorce litigation and ... this is work that I've been creeping up on, but I've been busy," he said.

Acting has lost its importance to him, he said.