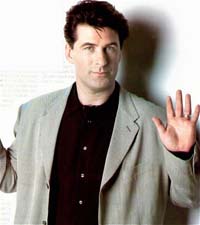 Alec Baldwin has parted ways with his agents at a major Hollywood talent agency, his spokesman said Monday.

The actor has made headlines in recent days after his angry voicemail to his daughter was obtained by the celebrity Web site TMZ.com and broadcast around the world.

Baldwin and actress Kim Basinger have been locked in a custody dispute over their 11-year-old daughter, Ireland, since their 2002 divorce.

In it, Baldwin yelled at his daughter for failing to answer the telephone for a prearranged call and called her a "rude, thoughtless little pig."

Baldwin has since apologized.