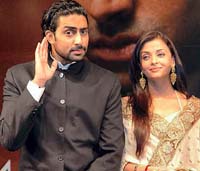 Police also questioned a fan, Jhanvi Kapoor, who cut her wrist outside the Bachchan home in Mumbai, claiming the star had promised to marry her.

"We didn't register a complaint as Jhanvi Kapoor had no case," said police officer A. Mohite. "This is a stunt."

Red and pink flowers, encircled by gold and green curtains, covered a huge air-conditioned tent in a garden adjoining the Bachchan family home where Rai and Bachchan will exchange garlands and wedding vows later Friday.

Media has dubbed the event "India's wedding of the year."

Police tightened security around the venue as the guest list was a who's who of India's rich and famous - including movie stars, top industrialists and politicians.

Fans and the media have been crowding around Bachchan's residence since pre-wedding ceremonies began two days ago. Some came bearing boxes of sweets and said they wanted to bless the couple.

Kapoor created a stir as she arrived at the Bachchan's house early Friday and slashed her wrist. She was given first-aid treatment at a nearby hospital.

Police recorded her statement, but said she appeared to have been taking drugs.

"She showed us no proof and her speech was slurred," Mohite said. "She seemed to have done this purely to catch the attention of the media."

Mohite also said Kapoor didn't give her real name and police have information that she was already married.

She had slit her wrist in the past also, he added.

Sporting a bandaged arm, she told reporters she loved Bachchan, who had promised to marry her.

To a question whether the Bollywood star reciprocated her love, she said: "He is not talking to me. I want to know why he doesn't talk to me." Kapoor was one of the 10 dancers in a promotional music video for a movie "Dus" (Ten) that Bachchan starred in two years ago, he said.

Bachchan and Rai were engaged to be married in a private ceremony in January.

Rai, who was Miss World in 1994, is one of India's most recognized faces overseas. She has acted in more than 30 movies and starred in several commercials for cosmetic and cola companies.

Bachchan comes from a famous Bollywood movie family - his father, Amitabh, and mother, Jaya, are among India's best known actors.