Angelina Jolie: "A Mighty Heart" is " very real and personal."

Angelina Jolie is no stranger to media frenzy. But while filming "A Mighty Heart"  the actress says things got out of hand. 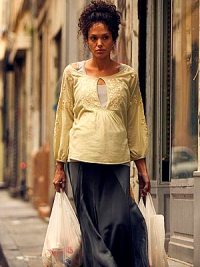 Angelina Jolie: "A Mighty Heart" is " very real and personal."

She blames the paparazzi for creating mayhem at a school where she was shooting scenes for the movie.

Her bodyguards who said they were trying to stave off photographers were accused of physically blocking parents from picking up their children. The gates of the school had been locked during filming, and a fracas took place when they were opened.

"It was not the film production that caused chaos," Jolie, 31, tells Entertainment Weekly magazine. "We were only guilty of bringing the paparazzi."

"A Mighty Heart," directed by Michael Winterbottom, is based on a memoir by Mariane Pearl, widow of Daniel Pearl, a reporter for The Wall Street Journal who was abducted and murdered in Pakistan in 2002 while researching a story on Islamic militancy.

Jolie plays Mariane Pearl and Dan Futterman plays Daniel Pearl. The film, scheduled for release in June by Viacom Inc.'s Paramount Vantage, will be shown at the annual Cannes Film Festival in the south of France next month.

Winterbottom's shooting style is a little like the taping of a reality show. He uses handheld cameras, encourages as much improvisation as the story line allows, and follows his actors wherever they go.

"It could get intense. Michael and I would have disagreements over where he could follow me," Jolie says. "I just needed to know that if things got too heavy, there'd be a place for me to cry by myself."