Faced with complaints that his donkey was too loud, attorney Gregory Shamoun decided to bring his case directly to the court: He had the donkey testify. 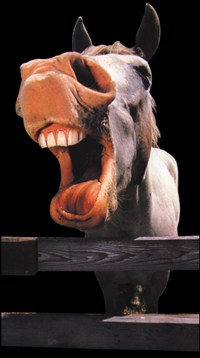 Buddy the donkey appeared in court Wednesday. He walked to the bench and stared at the jury, the picture of a gentle, well-mannered creature and not the loud, aggressive animal he had been accused of being.

Shamoun was in a dispute with oilman John Cantrell, who had complained to the city about a storage shed Shamoun was building in his backyard in Dallas. Cantrell said Shamoun retaliated by bringing the donkey from his ranch and putting him in the backyard.

"They bray a lot any time day or night. You never know when they're going to cut loose," he testified.

Despite the donkey's appearance, neither jurors nor Buddy had the last say - the neighbors settled their dispute while jurors deliberated.