Specialized equipment for people with disabilities

Three times a week, Vince Stankoski is lifted from his wheelchair onto a stationary bicycle. Electrodes are attached to three of his muscle groups, coaxing his paralyzed legs to pedal. 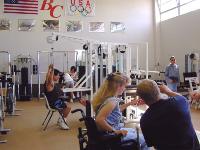 Specialized equipment for people with disabilities

It is the highlight of his workout.

"I like that I can look down at my legs and still see muscles there," said Stankoski, who lost the use of his legs after falling from a tree in 1998.

Apart from the bike, he also likes using the upper body weights, which come equipped with a seat that swivels away so he can move his wheelchair into position and lift.

Stankoski is one of the fortunate ones. He belongs to a gym specifically designed to accommodate people with disabilities.

Few other disabled people have that option. The basics of good health diet and exercise often present challenges for people with disabilities, a situation made more difficult by a common assumption that disability and poor health go hand in hand.

The result, according to the federal Centers for Disease Control and Prevention, is that people with disabilities roughly 19 percent of all Americans  are far less healthy than the average American. Since those with disabilities are the biggest users of medical services, that disparity could be costing hundreds of millions of tax dollars a year.

Those costs are likely to increase as the baby boomer generation grows older and more susceptible to disabilities.

"There's an enormous number of barriers that people with disabilities face when they try to become healthy," says Dr. James Rimmer, director of the National Center on Physical Activity & Disability, and a professor at the University of Illinois at Chicago.

Those barriers range from health clubs that view people with disabilities as potential liabilities to public health campaigns that bypass them entirely.

"There's a mind-set that people with disabilities are also ill and they shouldn't be exercising," says Jerry McCole, who heads the National Disability Sports Alliance. The group promotes athletic competition and physical activity among people with cerebral palsy, traumatic brain injury, stroke and other physically disabling conditions.

"It's like any minority group out of sight, out of mind," McCole says.

Deborrah Pittman, head of the computer science department at Bluefield State College in West Virginia, was diagnosed with multiple sclerosis in 1997 and sometimes uses a wheelchair. She lives in a state where one in four adults is disabled, the highest rate in the country.

Pittman says she is lucky that a gym in Bluefield, near the Virginia border, has one or two pieces of equipment she can use to get an upper body workout.

Part of the problem, according to experts, is the common assumption that people with disabilities are simply unable to take on physical tasks.

That's starting to change. In January, Rimmer and a group of doctors and advocates launched the Inclusive Fitness Coalition to urge private health clubs and gyms to make universal accessibility part of their basic service.

At places such as Optimal Fitness, where Stankoski works out, that's already happening. Optimal Fitness is part of Good Shepherd, an acute care rehabilitation hospital. The fitness center is open to hospital patients and employees, but also to anyone with a qualifying disability.

There is no nearby exercise alternative for people like Stankoski. The next nearest place is 60 miles (100 kilometers) away in Philadelphia.

"Things changed really fast for me," Stankoski says, recalling the accident that paralyzed him. But rehabilitation and regular fitness have helped him to stay trim and muscular.

"Since I started here, everything's been going good," he says.