Father of lieutenant who refused to go to Iraq criticizes War 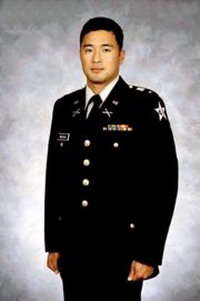 Father of lieutenant who refused to go to Iraq criticizes War

Father of Lt. Ehren Watada, who refused to go to Iraq, has toured USA to criticize the War in Iraq and gain support for his son.

Bob Watada said his life dramatically changed after his son became the first military officer to face a court-martial for publicly refusing to deploy to Iraq.

He researched events leading up the war, started criticizing the Bush administration on its reasons for invading Iraq and spent much of the past year traveling with his wife to speak about his son and raise money for his legal costs.

"It was because of him that I've gone out and educated myself," said Watada, a 67-year-old retired state official.

Watada spoke about his anti-war activities Saturday at a Society of Professional Journalists regional meeting in Honolulu.

Ehren Watada, 28, refused to deploy with his unit, the 3rd Brigade, 2nd Infantry Division, in June because he believes the war is illegal and he did not want to commit acts that he felt could be war crimes. He faces charges of missing movement and conduct unbecoming an officer. If convicted, he could be sentenced to six years in prison and be dishonorably discharged.

He faces a second court-martial July 16 after his first military trial in February ended when the judge said he did not believe the soldier fully understood a pretrial agreement he signed.

His lawyers have advised him to stop talking about the case, his father said.

"My son has somewhat backed off a little bit," Watada said. "He's somewhat become afraid of what people are going to do to him right now. He's become very cautious."

Bob Watada, however, continues to attract attention despite canceling many of his appearances after his wife had a stroke. He said he still gets about 30 e-mails a day.

Watada, who had seven brothers in the military, also opposed the Vietnam War and extended his education to avoid the draft, claiming that that war was illegal.

He said he discussed his opinions on war with his son when Ehren decided to join the Army. "He felt there were terrorists out there and he wanted to do his part," Watada said.