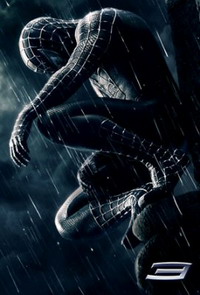 Spider-man 3 global debut took place in Tokyo on Monday. May be it is the last installment of the famous blockbuster. There are two new villains – Sandman and Venom. The movie is promising  the gold rush for Sony.

Stars Toby Maguire and Kirsten Dunst took a walk down the red carpet for the premiere, held at a ritzy Tokyo arena in a drizzling rain.

Japan, where Sony is headquartered, is a major market for the film and related merchandise.

In "Spider-Man 3," Maguire's bright-eyed Peter Parker and Spidey pick up where they left off, with Peter finally hooked up with girl-next-door Mary Jane (Dunst) and juggling his photography job, schoolwork, love life and superhero-dom.

But then the plot thickens.

Peter gains fresh powers when his blue-and-red Spider-Man costume turns black and his dark side asserts itself, leaving him tangled in an inner struggle just as two new villains (Thomas Haden Church and Topher Grace) turn up. Peter also has the enmity of his former best friend, Harry (James Franco), to deal with.

Spider-man fans will remember that Peter was to blame for the death of his friend's father, who also happened to be an evil genius.

The initial "Spider-Man" took in US$114.8 million (EUR89.8 million) in its first weekend in 2002, a record at the time that gave a much-needed boost to the stocks of Sony Pictures and guaranteed the franchise's continuity.

But three may be all.

Sam Raimi, who made the first two "Spider-Man" movies, is directing again, but Maguire has been coy about whether this is his final Peter performance.

"I feel like this film is kind of a natural conclusion to a lot of stuff that's happened in the first two movies. It kind of feels like a natural trilogy," said Maguire, adding that he's open to donning the Spidey suit again "if a story presents itself, if we come up with something we feel deserves to be told."

"I'm not going to make them just because they've been successful," he added.

"Spider-Man 3" will have its U.S. premiere at the Tribeca Film Festival on April 30 in the New York City borough of Queens, Peter Parker's home town. The U.S. premiere - the last stop on an eight-city world tour - will kick off a planned "Spider-Man Week in NYC," which will include events and promotions throughout the city.

The film opens to general audiences on May 1 in Japan and on May 4 globally.