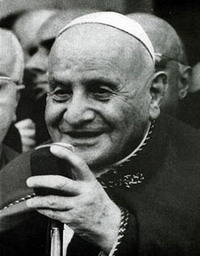 While papal delegate in Turkey and Greece during the Holocaust , Roncalli sent money and false documents to Budapest which were used by Catholic officials and Swedish diplomat Raoul Wallenberg, among others, to assist tens of thousands of Hungarian Jews.

As Pope John XXIII, Roncalli made great efforts to help the reconciliation between Catholics and Jews.

The plaque describing Roncalli's acts saving Jews was placed on a wall outside the Dohany street Synagogue, the largest synagogue in Europe.

"Pope John's actions during World War II serve as a real-life parable for all who face moral challenges in difficult times," said Warren L. Miller, chairman of the U.S. Commission for the Preservation of America's Heritage Abroad.

"We know if mankind had more people like (Roncalli), history may have been different. So let his heroism and courage motivate all of us to act when we are confronted with prejudice and intolerance."

Since 2001, Hungary has held the Holocaust Memorial Day on April 16, choosing the 1944 date marking the start of the ghettoization of Hungarian Jews.

"We should not forget for even a single moment that the horrors of 60 years ago did not begin with the construction of the gas chambers, but with words of hate and exclusion," Prime Minister Ferenc Gyurcsany said.

Gyurcsany said that educating younger generations and personal responsibility were means to ensure that the Holocaust could never happen again.

Several memorial events were held Sunday evening, including the March of The Living - a candlelit walk from the Holocaust Memorial Center to the Dohany Street Synagogue.

Agnes Horvath, 72, remembered her childhood 63 years ago. Only a 9-year-old then, she said, she still has a clear picture.

"That day, I was not at the pool - like I was today - but wore the yellow star and lived segregated from others," Horvath said as she grabbed her daughter Andrea's hand and walked through her memories.

"As I march, I remember those who I cannot visit at the cemetery, those who don't even have a grave," Horvath said.

Also, a concert was held outside the House of Terror, a museum in the building which once served as headquarters for Hungary's secret police during both the Nazi and communist eras.

The U.S. Commission for the Preservation of America's Heritage Abroad, established by the U.S. government in 1985, deals with the restoration and preservation of cemeteries, monuments and historical sites in Central and Eastern Europe associated with the heritage of Americans.