"Sahara" budget swelled with bribes in Morocco and the filming of a $2 million (1.48 million EUR) airplane crash that never made it onscreen. 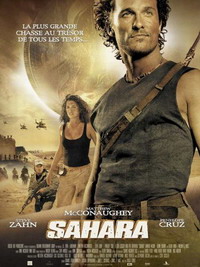 A final budget and other documents filed as confidential exhibits in a lawsuit were cited Saturday by the Los Angeles Times.

"Sahara," starring Matthew McConaughey and Penelope Cruz, was based on a book by best-selling author Clive Cussler.

Cussler has sued Crusader Entertainment, a company owned by Denver billionaire Philip Anschutz, claiming it reneged on a contract that gave him creative control over the movie.

Crusader filed a countersuit against Cussler, claiming he was disruptive during the film-making process and disparaged the movie before its release.

Each suit seeks millions of dollars.

Crusader's attorneys contend that the company lost more than $80 million (59.12 million EUR) on "Sahara" even though it opened No. 1 at the box office in April 2005. It generated $122 million (90.16 million EUR) in gross box-office sales, the Times said.

Other expenses included filming the crash of a vintage airplane, a 46-second sequence that was deleted from the movie because "in the context of the movie, it didn't work," director Breck Eisner said.

On the other hand, Crusader received $20.4 million (15.08 million EUR) in government incentives to film portions of "Sahara" and do post-production work in Europe, the newspaper reported.

Anschutz said in a sworn deposition that he never set a limit on production costs but became "concerned" as they climbed to $160 million (118.24 million EUR).